Working in partnership with Herefordshire Council, local contractor J Harper & Sons Ltd and veterans’ charity Alabaré, who were supported with funding from Longleigh Foundation, Stonewater completed the 19-home scheme which provides a safe and secure place to call home for up to nine veterans and their families in December 2020. 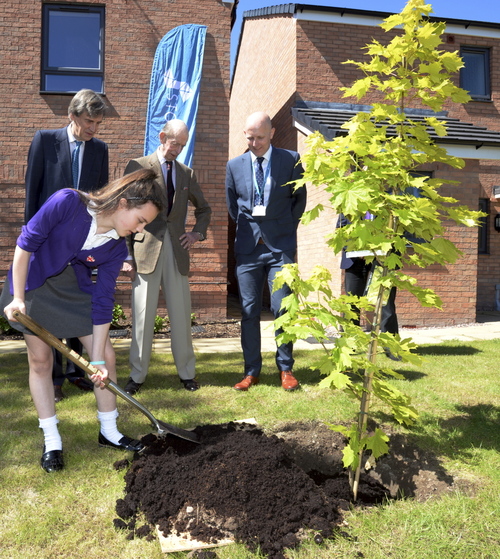 HRH The Duke of Kent was greeted by flag-waving pupils from Leominster Primary School, before being welcomed to Leominster by Lord-Lieutenant of Herefordshire, Mr Edward Harley OBE and Mrs Victoria Harley.

The Duke was introduced to Sarah de Rohan, High Sheriff of Herefordshire, and other local dignitaries, including Cllr John Rumsey, Mayor of Leominster

Stonewater’s Director of Development for South & West, Matt Crucefix then introduced the Duke to key individuals that were instrumental in the success of the scheme: Gary Chapman, Project Manager from Alabaré, Mike Harvey, Group Commercial Director at J Harper & Sons, Ann Dokov, one of Stonewater’s Board Members and Andy Peers, CEO of Longleigh Foundation.

HRH then took the opportunity to look around one of the homes that the veterans helped to build and chatted with Clare Bray, Head of Development (Special Projects) at Stonewater, Ian Poole from veterans’ charity FirstLight Trust and veteran Adam Daniel who now lives in one of the new homes. The Duke heard from Adam about living in his new home and the opportunities the project had offered the veterans to gain valuable, transferable skills to improve their employment opportunities.

The Duke then met other residents and guests who have been involved in this community-led development, before formally opening Noden’s Mews by unveiling a plaque commemorating the visit in HRH the Queen’s Diamond Jubilee year and planting a tree with the help of Elise, a pupil from Leominster Primary School.

The planting of a tree forming part of Stonewater’s commitment to sustainability which sees the organisation plant five trees for every new home built in partnership with the Community Forest Trust, which has led to the planting of 17,000 trees. 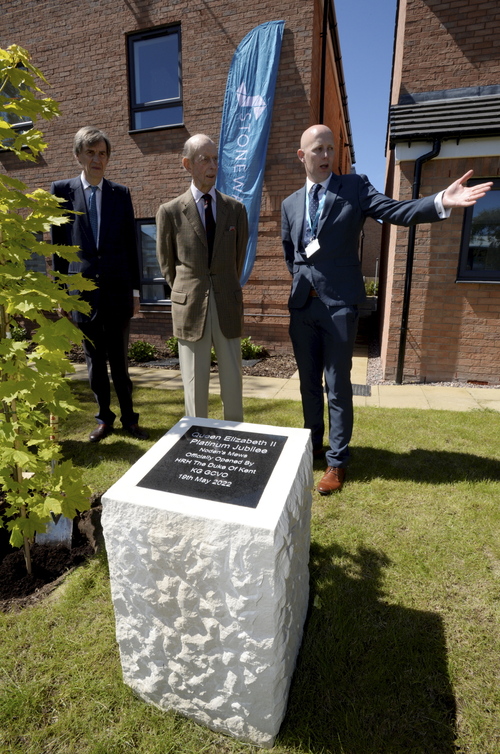 Matt Crucefix, Director of Development (South and West) at Stonewater, said: “This particular development has been a unique opportunity for Stonewater to not only bring 19 much-needed new homes to Leominster but also provide the veterans working on the project with the skills they need to secure themselves long-term employment.

“It was with great pride I was able to host HRH the Duke of Kent to meet the partners who worked with us on the project and to see the veterans living alongside other Stonewater residents in the cohesive community created as a result.

“Today’s Royal Visit has been a great opportunity to show how housing providers, local authorities, and specialist charities can work together to combat veteran homelessness and we hope to see more projects like this in the future.”

Mike Harvey, Group Commercial Director of J. Harper and Sons (Leominster) Limited said: “We were thrilled to be part of such an innovative local project that from the outset we knew would not only deliver high-quality new homes for the area but also significantly improve the employability of the veterans who worked alongside our team on the build.”

Gary Chapman, Project Manager from Alabaré added: "Schemes like this offer exciting opportunities to veterans and communities alike. Working alongside Stonewater, Herefordshire Council and Harpers, we have created not only homes for veterans to live in, but a community in which they can thrive. Several veterans on the project have gained employment in the construction industry thanks to their community-build experience, and others have been able to reconnect with their families now they have a safe, permanent place to call home.

“We are delighted to be working with Stonewater UK on our new veterans' scheme in Wiltshire and look forward to supporting more veterans into new homes and new lives."

Cllr Barry Durkin, at Herefordshire Council, said: “We are committed to supporting local veterans across Herefordshire and this particular partnership project with Stonewater and Alabaré has been a great opportunity to provide more affordable housing for veterans. When we initially sought a housing association partner to deliver a veteran community-build scheme locally we knew the project wouldn’t be without its challenges, but we are delighted to be here today and celebrate the realisation of our vision for the project. It was an honour for Herefordshire and the veterans that HRH Duke of Kent came to open Noden’s Mews” 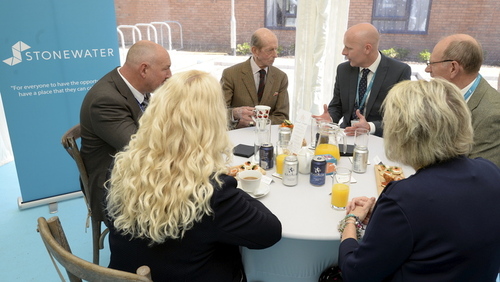 Cllr Ange Tyler, Herefordshire Council Cabinet member for Housing, Regulatory Services and Community, also attended the official opening. She said: “It was a pleasure to be invited to witness the official opening of Noden’s Mews and sit with the Duke of Kent to talk about the project. The project has been a perfect example of how community-led partnership working can achieve great things.  The delivery of affordable housing is a national issue, and one that we are prioritising at a local level through the aims of the Council’s County Plan. Given Herefordshire’s strong ties to the armed forces, it is fantastic to see another step taken to combat veteran homelessness and provide the housing and support that many veterans need within our communities.”

Andy Peers, CEO of Longleigh Foundations added: “In our role as a grant-making charitable foundation supporting individuals and communities served by the social housing sector, this project epitomises what the sector can achieve and the vital role we can play. It has been a real pleasure to see the transformational impact of the project on the lives of the veterans that took part.”